The Cultural Division began in 1980s as a small group of Catawba citizens meeting in their homes to preserve, protect, promote, and maintain Catawba culture and history, particularly our ancient unbroken pottery tradition. This group was officially incorporated in 1989 in the midst of the tribe’s fight for Federal Restoration. Since then the Cultural Division has pursued its mission through a cultural center and museum, a store for buying and selling Catawba arts, the Catawba Archives, a tribal library, a Catawba Language Project, the Tribal Historic Preservation Office, and much more. The Cultural Center’s board is entirely constituted of Catawba citizens. 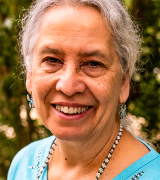 Dr. Wenonah Haire is the Director of Catawba Nation’s Cultural Division as well as the Nation’s Tribal Historic Preservation Office. She has worked closely with Catawba citizens, staff, volunteers, and partners since 1989 to forward the mission of “preserving, protecting, promoting, and maintaining the rich cultural heritage of the Catawba Nation.”