Junebug Productions emerged from the Free Southern Theater in 1980 with a mission to create and support artistic works that question and confront inequitable conditions that have historically impacted the Black community. Through interrogation, we challenge ourselves and those aligned with the organization to make greater and deeper contributions toward a just society.

Founded in 1980, Junebug Productions, Inc. (JPI) is the organizational successor to the Free Southern Theater (FST), launched in 1963 in Tougaloo, MS, by John O'Neal, Doris Derby and Gilbert Moses as the cultural wing of the Student Nonviolent Coordinating Committee (SNCC). Over the past 40+ years, JPI has toured 12 original productions to over 46 states and has presented several touring productions and local artists in New Orleans. The company's longest running and best known production was DON'T START ME TO TALKING OR I'LL TELL EVERYTHING I KNOW, a one-man show written and performed by our founding artistic director, John O'Neal (1940-2019) inhabiting the character of the mythic Black Everyman, Junebug Jabbo Jones, a figure created during the Civil Rights Movement to represent the wisdom of grassroots people. In addition to our touring work, JPI also operates a local program called the HOMECOMING PROJECT, which uses art and culture to advocate for the equitable redevelopment of New Orleans post-Hurricane Katrina (2005), including the right to return of over 99,000 Black people who still remain displaced by the storm. Additionally, as a leader and catalyst in the progressive arts field, JPI has adapted and developed the Story Circle process first used during the FST's heyday as a tool for scores of artists and organizers nationwide to democratically engage communities today in profound and revelatory ways. 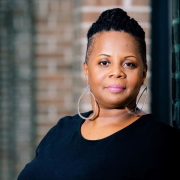 Stephanie McKee-Anderson is a performer, choreographer, educator, facilitator and cultural organizer born in Picayune, MS and raised in New Orleans.

She is the founder of Moving Stories Dance Project, an organization committed to dance education that provides opportunities for dancers and choreographers to showcase their talents. In 2007, she was awarded The Academy of Educational Development/New Voices Fellowship, an award for emerging leaders.

For the past 20 years, Stephanie has been involved with Junebug Productions as an artist and educator. Most recently she served as Associate Artistic Director of the first annual Homecoming Project 2011, a place-based performance project that addresses the Right of Return and what home means to communities in post-Katrina New Orleans. In 2006, Stephanie was one of ten artists who collaborated to create the original production, “UPROOTED: The Katrina Project,” co-produced by Junebug Productions.

As an artist and cultural organizer, Stephanie is deeply committed to creating work that supports social justice and aligns with the FST and Junebug legacy.