Using Film as a Springboard for Vital Conversations 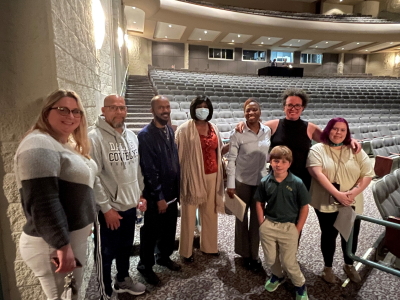 In April 2022, New Orleans-based film producer Darcy McKinnon visited with community members of all ages at Bologna Performing Arts Center in Cleveland, Mississippi after a Southern Circuit screening of the documentary The Neutral Ground. The film, directed by The Daily Show alum C.J. Hunt, explores the activism and discourse concerning confederate monuments in New Orleans and the greater South. The conversation is fresh on the minds of Cleveland residents following their community's vote in 2020 to remove a confederate statue from the Bolivar County Courthouse. Branding their Southern Circuit dates as the "No More Amnesia Tour", the filmmaking team aimed to catalyze similar conversations in communities across the South reckoning with their own histories.

With a background in education and arts organization leadership, Darcy McKinnon produces documentary work that focuses on the American South. McKinnon's work has been broadcast on POV, LPB and Cinemax, and her current projects have received support from SFFILM, CAAM, Chicken and Egg, Firelight Media, ITVS, Black Public Media, Sundance and Tribeca.